If you've been following some of the Goliath threads, including mine on Gearslutz and here over the past year and a half, you might know that I've been through a fairly extensive ordeal with Antelope Audio regarding AES/EBU issues on the Goliath standard and HD units. I've had 4 RMA's, and am currently using unit number 5 that I've had here.

During that time, I've done my best to document and troubleshoot the various issues with screenshots, audio, and video, and essentially become a beta tester for Antelope audio. I've also dealt with many people in Bulgaria, where Antelope Audio and their staff are based. Some were great to deal with, some not so much, and I've certainly done my share of getting angry and frustrated with them on the phone trying to resolve these issues.

I've at times also felt somewhat dismissed and marginalized by some at the company, and I've certainly done my share of getting angry with them on the phone trying to resolve these issues. I'm not always the easiest person to deal with with things like this. I tend to make myself a thorn in the side of a company until things get properly resolved. So, definite frustration at times with them, and I'm sure them with me, mostly due to the inability to get to the heart of the issues.

All that being said, as I had mentioned previously, I have been in communication with Andrew at Antelope for the last few months, and he has been superb. We did end up going through many steps again to troubleshoot, and had conversations by email and over the phone about what the issue might be.

A couple months ago, I had resigned to the fact that I'd just need to carry on without a resolution, and I was okay with that. Everything else with my Goliath was working well, and I'm happy with it.

Then, last week I got an email from Andrew about the new update, which includes the all new Antelope Launcher (I hadn't yet seen Alex's post here). Andrew has informed me that from what he understood, the Goliath AES/EBU protocol has been completely re-written by R&D in this update.

I installed the new firmware and launcher, and am very happy to report that things have so far been rock solid here, and the difference is immediately apparent. Night and day. I no longer have to unplug AES/EBU cables to get the Goliath to "see" my Bricasti at the beginning of a session. Communication and clocking between devices is now solid over the past few days since doing the updates.

So, I just wanted take the time to say a very big thank you to Andrew and Alex, and Antelope R&D and the Antelope crew for this major update and rewrite of the protocol. It feels like we are finally at the end of the long troubleshooting journey here. I'm looking forward to continuing to use my Goliath HD as the central heart of my studio, a product which has now been immensely improved with this update. If you were hesitant to consider a Goliath do to any issues I had documented, it may be now worth taking a second look.

Worth the wait then, Mr. T... even 'though I know you were no longer waiting, but you know what I mean - your patience and faith have paid off!

I'm feeling good about things now. I'm excited now that the new Edge microphones are out, especially the Duo version.

I've got the Townsend Labs here, and it's fantastic, but it will be nice to be able to utilize similar technology with the Goliath directely.

Hmm. The latest update of the Goliath firmware (late October) has messed something up now. The Goliath panel disappears completely on my system after launching...


I can see it if I click "view all windows" from the dock, but it doesn't stay in view.

Very strange. I emailed Antelope a few days ago. Just waiting for a reply back.
Last edited: Nov 2, 2018

Tried with no luck to get through to Antelope support. I swear they have blacklisted me

I was #1 in the queue, then it went to voicemail, happened 3 times.

It's so odd with this company. Sometimes they are so off the mark with their updates and I'm scratching my head wondering if they've actually tested things before their release... This isn't the first time an update has seriously taken things sideways.

Fortunately I have a session with a client in 15 minutes, so I was able to resolve it on my own in time. 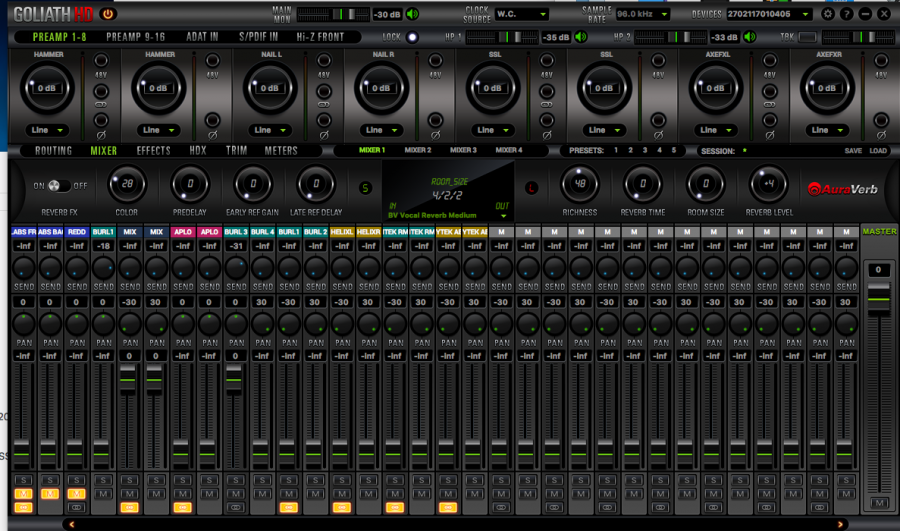 Don't know what to say at this point, T.

For anyone else wondering about this or possibly having this issue, what happens is that when you install the software (in my case Antelope Launcher 1.64), during the installation process the installer immediately goes online and updates to the latest version. In my case, that was the version causing the disappearing software panel window.

I had to uninstall everything first, then take the system offline, and the install Antelope Launcher 1.64 again to get things working properly. That way it's not automatically updating past 1.64

And to add to the headache, if your system is online when you open the launcher (which you have to open now to launch the Goliath panel), it will force download the updated Goliath launcher software, and you can't access anything without updating. So, you have to take your system offline as well to even open the software to use it.

There isn't even a preference setting for the automatic-update thing as there is in Kemper's Rig Manager?

Kemper's software even lets you specify whether you want to allow beta, full releases or none at all.